I just did another long desired feature: Video conferences support for Windows. There already were attempts to do it, but they were not finished nor even published – this one is already in Pidgin’s tree, so it’s a matter of time to get them released (just wait for 3.0.0). If you don’t want to wait, you can always grab a development build. 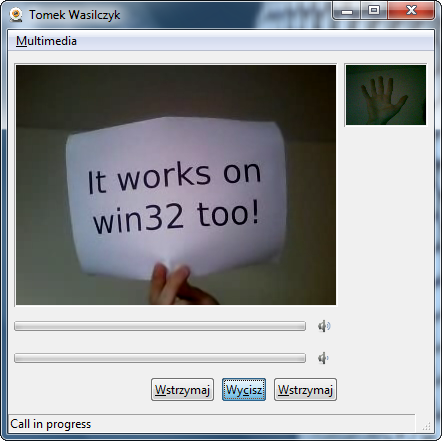 I did a lot of tweaks both in Pidgin and its dependencies (GStreamer and related), but finally everything looks working and stable. The hard part, unlike in the previous Eion’s attempt, was the camera capture plugins for GStreamer – DirectShow and WinKS. The first one is not buildable in newer gst-plugins-bad releases (at least, for mingw), the second is buggy. I’ve chosen to work with WinKS: the main problem was, it had broken support for different capture resolutions (I guess, old cameras had no support for it, so they were not affected). Many hours of debugging resulted in a simple patch, that makes the resolution fixed. The other one existed in Pidgin itself: there were no possibility to select camera, because winks used different method of device enumeration, than Pidgin supported.

On the occasion of testing VV on Windows, I’ve came up with a simple idea: some users may do not want to show their faces in video conferences, but they could want to see others. So, I implemented a new, virtual device (both for Linux and Windows): Disabled. Depending on user’s choice, it displays black screen or random noise, like on TV. Simple, but useful. 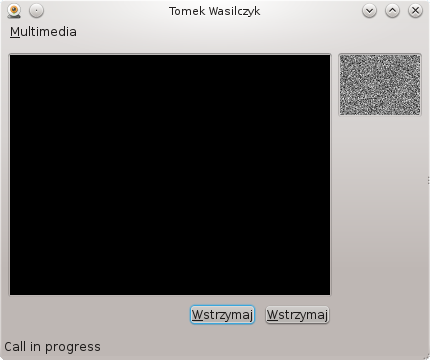 Testing on Windows platform showed some bugs, that were hardly noticeable before: hangs on video testing, displaying a video output in a separate window. Beyond them, I also fixed some memleaks and did other tiny fixes.

The source code is available directly from the hg repository and openSUSE Build Service project (for dependencies). If you just want to test the VV feature on Windows, you can just grab the offline installer.

As always, I’m waiting for any feedback, bug reports and comments.

15 thoughts on “Pidgin with Video finally for Windows”